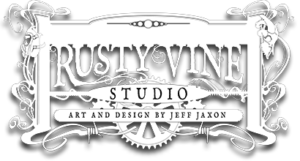 Q: Are you available for commissions?
A: You bet. Big or small, we can bring a unique aesthetic to your project.

Q: I like an item in on your site, but I want to make a couple changes, can you do that?
A: Of course! Y’know… probably. Let’s talk!

Q: Will having awesome Rusty Vine Studio stuff make me awesome?
A: We’re not saying that you’re not awesome if you don’t have some of our awesome stuff, but we’re not not saying that. Look, let’s put it this way: there are degrees of awesomeness, right? Maybe you’re already awesome, but you’re stuck against some kind of awesomeness ceiling or something. That’s where we come in. Every item from Rusty Vine Studio can help you smash through that ceiling and make you even more awesome. Ooh, that’s good. I should write that down.

Q: What happens if I don’t have awesome stuff from Rusty Vine Studio?
A: You know that person or business that is always trying to be more awesome than you? Well, what if they buy some of our awesome stuff and you don’t? You don’t need that kind of hassle. Wouldn’t it be better if you could say, “You can’t get one of these awesome Rusty Vine pieces because I got got the last one?” Or, “That’s a nice Rusty Vine piece you have there… I have two of them.” There’s always the danger of starting some kind of “Awesome stuff from Rusty Vine” arms race… but in life, you have to take chances.

Q: Are these questions really “asked frequently”, or are these just “Preemptively Answered Questions” and cheap filler?
A: Hush you, nobody was talking to you. Next.

Q: What about Tech Support?
A: It sucked. That’s why I do this now.

Fresh Off the Twitters